For the first time in Lithuania, we organized a spectacular event of great beauty, the ‘DIOR Woman’ exhibition featuring historical exhibits of the legendary Christian Dior fashion house from the private collection of the fashion historian Alexandre Vassiliev. The exhibitions explored the story of one of the world’s most prestigious and influential couture houses through the series of themes, featuring women’s dresses, suits, shoes, accessories, perfume, and sketches designed between 1947 and 1988 by Christian Dior, Yves Saint Laurent and Marc Bohan, the designers of the fashion house, and several stunning images.

Kaunas PPC Akropolis is positioning itself as a fashion shopping center. The aim of its managers is not only to respond to the current fashion trends but also to inspire visitors. We proposed to organize a historical fashion exhibition of a special format with an aim of not only enhancing the image of the fashion shopping center but also attracting the flow of visitors to the shopping center which dipped due to pandemic-related restrictions.

The ‘DIOR Woman’ exhibition was postponed twice due to the pandemic. Despite all the challenges, carefully planned for more than two years, it was opened in Kaunas PPC Akropolis’ Event Square on the 20th of October 2021. In one month, the visitors could view the legendary pieces of the House of Dior, including dresses and suits from Christian Dior’s iconic spring 1947 New Look collection, which caused a revolution in the fashion world.

The exhibition of garments by the Christian Dior fashion house was chosen intentionally. After the presentation of his debut collection in Paris in 1947, Dior became a global sensation and in just a decade created a fashion empire that has been among the top couture houses for over 70 years. Hardly any fashion connoisseur would argue his influence on the female style. Dior was the couturier for many prominent women, including Marlen Dietrich, Grace Kelly, Marilyn Monroe, Elizabeth Taylor, and the members of the British Royal family. His innovative approach to fashion brought back women’s dreams, the long-lost sense of freedom, femininity, and joie de vivre. Dior’s suits were characterized by fluid draping, luxury fabrics, his A-line skirts had abundant pleats, and his silhouettes accentuated bust, waist, and hips.

“Women, with their sure instincts, realized that my intention was to make them not just more beautiful, but also happier.”

The exhibition featured about 50 women’s suits and about 100 Christian Dior fashion house accessories carefully sourced from the collection of the Alexandre Vassiliev Foundation. All exhibits were authentic, exclusive, and had their own history: dresses, suits, shoes, hats, gloves, perfume, jewelry, and handbags – all had previous owners and some garments were delivered directly from France. The exhibition included a suit from the wardrobe of Alla Ilchun, Dior’s muse, hand-drawn sketches of dresses, and authentic photographs that revealed the spirit and everyday life of the fashion house at the time.

The scenography and decor of the exhibition were created by Mantas Petruškevičius, the most famous Lithuanian florist-decorator. The decorator aimed to reveal the personality of Christian Dior and the spirit of France. He created a stylized garden with a bubbling fountain, columns, live box trees, bouquets of lilies and lilies of the valley, recreation spaces, and French music. Mantas Petruškevičius took inspiration from the biography of Christian Dior. Since his childhood, the designer particularly loved flowers and spent hours with his mother in the garden. 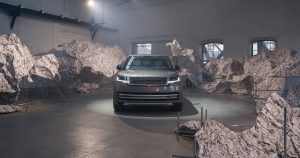 The New RANGE ROVER – The Most Desirable Ever Created 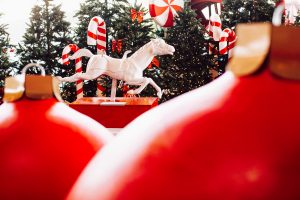 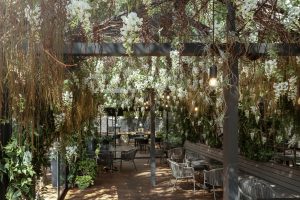